Many people find that wearing a chronograph watch is convenient as it is stylish. Not only does a chronograph watch have the charm and essence of sophistication, but it can also prove to be a handy companion when time becomes a limited commodity for certain activities. Whether that is to track the time for a sporting event such as a race, swimming competition, or just to manage your time more effectively when getting ready for work.

The chronograph watch can be identified by its conventional analogue watch dial with smaller dials (usually three dials) within, that can track periods of time and enable the watch to be used as a stopwatch.

The smaller dials can be placed at various positions on the main dial, depending on how the watch movement has been designed. The most common type of chronograph watch is found to have a tri-compax dial; one dial that records the seconds (and is usually referred to as the sub-second dial), a second tracks minutes and the third, the hours.

The side profile of a chronograph is usually greeted with the conventional crown to reset the analogue time with two extra push buttons on either side, to control the stopwatch function – although chronographs can also take different appearances with a varied number of push buttons.

All of the dials can be easily stop, resume and reset, by using the two push buttons which allows the watch to be more dynamic when being used to time certain events that required successive measurements – developed by Adolphe Nicole.

As the popularity of the chronograph watch became more popular, the watch style began to develop other complications (functions). One of the most commonly recognised chronograph watches is the motorsport chronograph which features a tachymeter bezel that runs along the outside of the watch which makes it ideal for calculating speed based on time or distance based on speed – a feature that proved to be highly useful in motorsport racing back in the 1960s.

The tachymeter can also be used in the workplace to establish productivity levels on production lines – such as how many bottles of beer are produced each hour. Some watches also have a telemeter function that can calculate the distance to a certain event, whilst others have a pulsometer.

There is something very stylish and visually pleasing about a chronograph watch, and now you can find the best chronograph watches under £500 budget, and still get the sense of elegence. This specific watch style is always popular in the watch community, as they combine the classic good looks of a beautiful analogue watch with the benefit of multifunctional use. 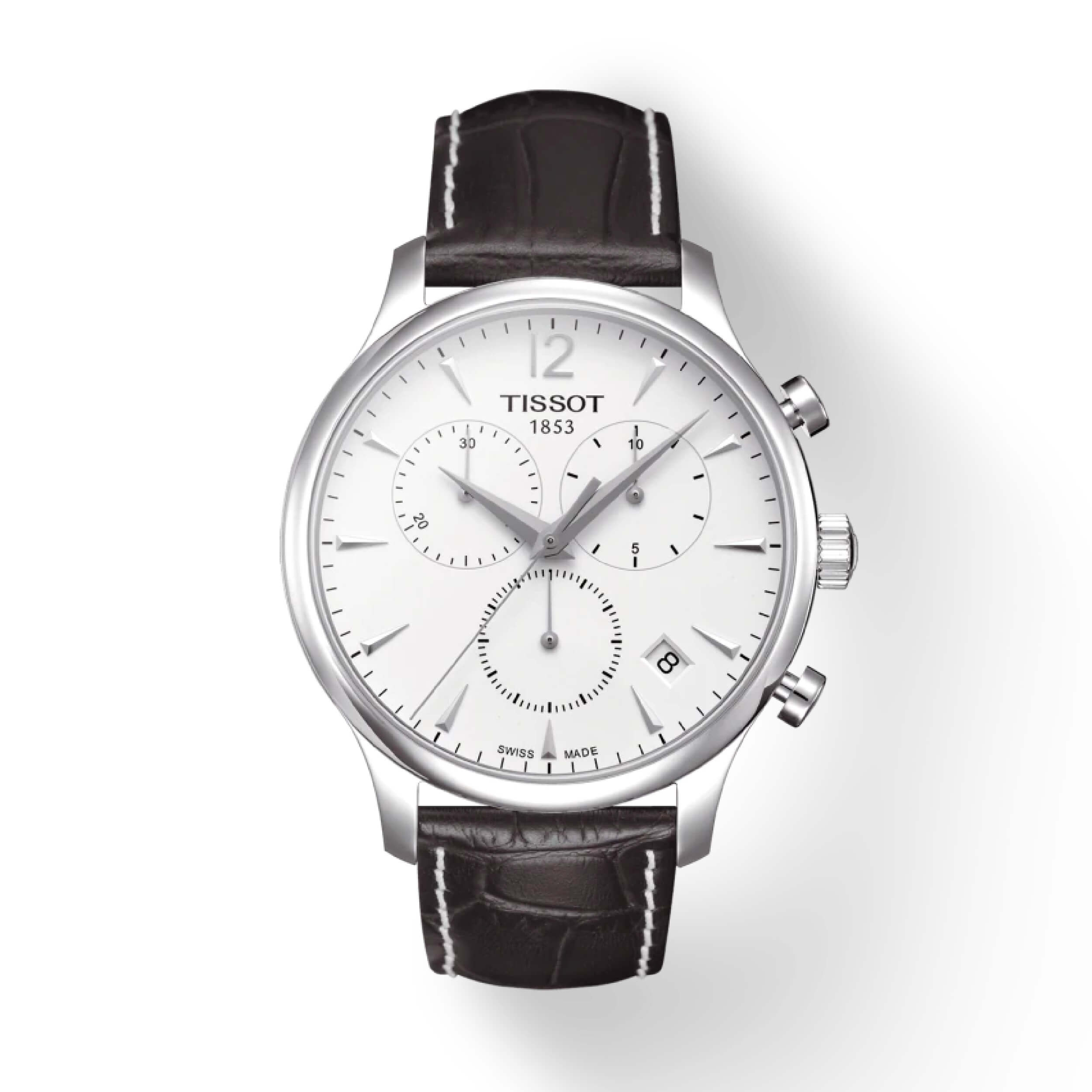 This watch is elegant in a traditional design inspired by the 1950s and is perfectly balanced between classic details and subtle modern details such as its stainless-steel case with modern curved sapphire crystal.

The dial is silver with one minute and larger five-minute indexes with only the number 12 marked. There are two mini-dials towards the 12 position, with a single mini -dial below and all of these are in silver. Between the 4th and 5th index, there is a small window that clearly shows the date. The style of this watch is perfectly complemented by its dark brown embossed leather strap.

This classic chronograph is brought to you by Tissot, the Swiss luxury watchmakers that was founded in 1853 by Charles- Félicien Tissot in Le Locle. The name Tissot is closely linked with many sports including motor racing, basketball and Tour de France. Tissot is the official timekeeper for Motor GP, ice hockey, cycling and the FIBA.

This watch comes with a two-year warranty and is water resistant to 3 bars (30 metres/100 feet). 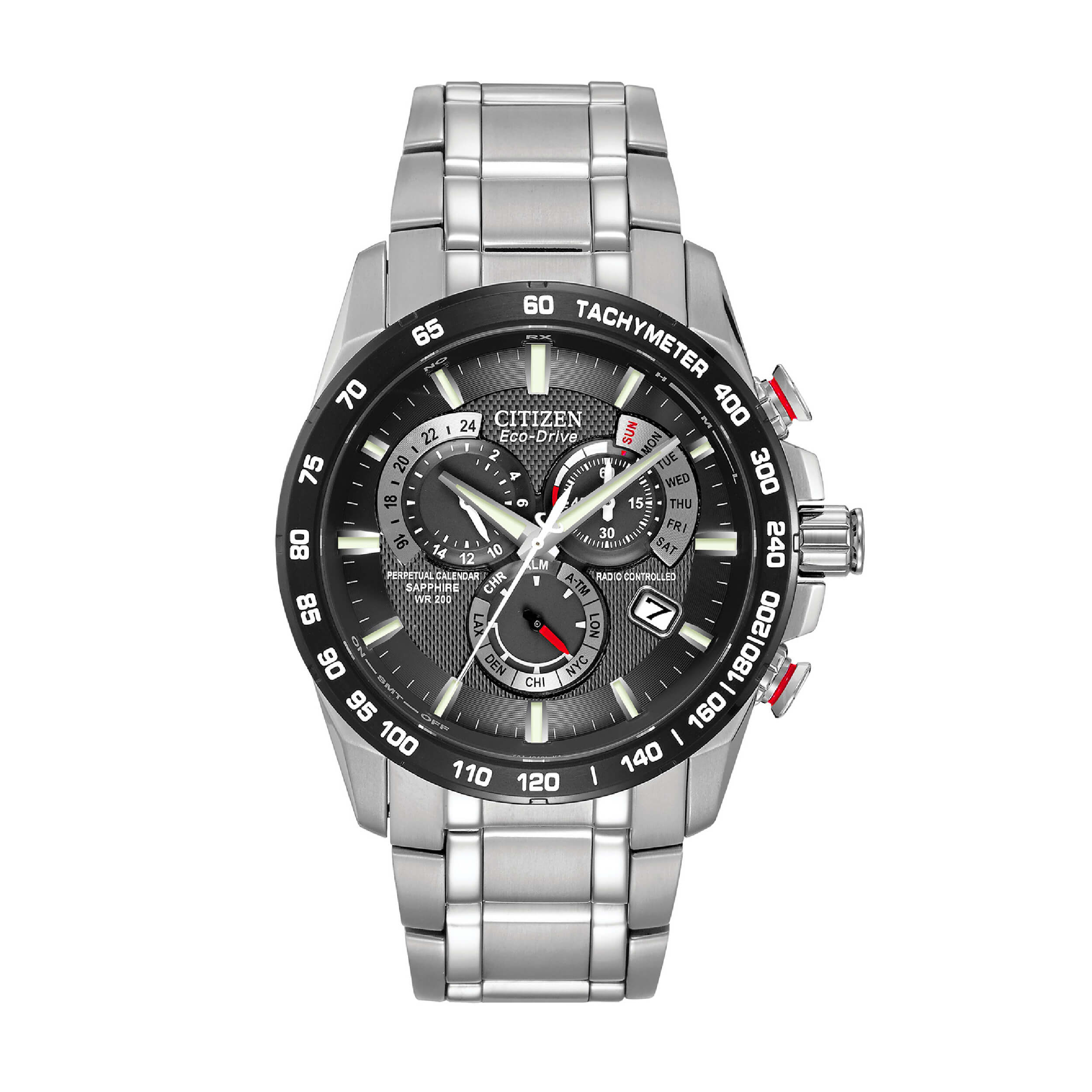 A slightly smarter designed chronograph with stainless steel 42 mm case and bracelet, black face with anti-reflective sapphire crystal and luminous hands and markers, this watch combines great looks with atomic timekeeping technology and numerous complications – meaning that your watch will always show you the correct time, without ever having to change it.

The day/date is radio-controlled in five time zones. There are two mini-dials towards the 12 o’clock position and a third mini-dial below. There is a one-second chronograph – up to 60 minutes, 12/ 24-hour time and a tachymeter on the bezel. This watch is powered by any light and does not require a battery.

Citizen is a well-known brand of Japanese watches, made by a corporate global group based in Tokyo. It is a brand that is considered a pioneer in new watch movements and technologies. A great piece to add to your watch collection if you don’t already have one. 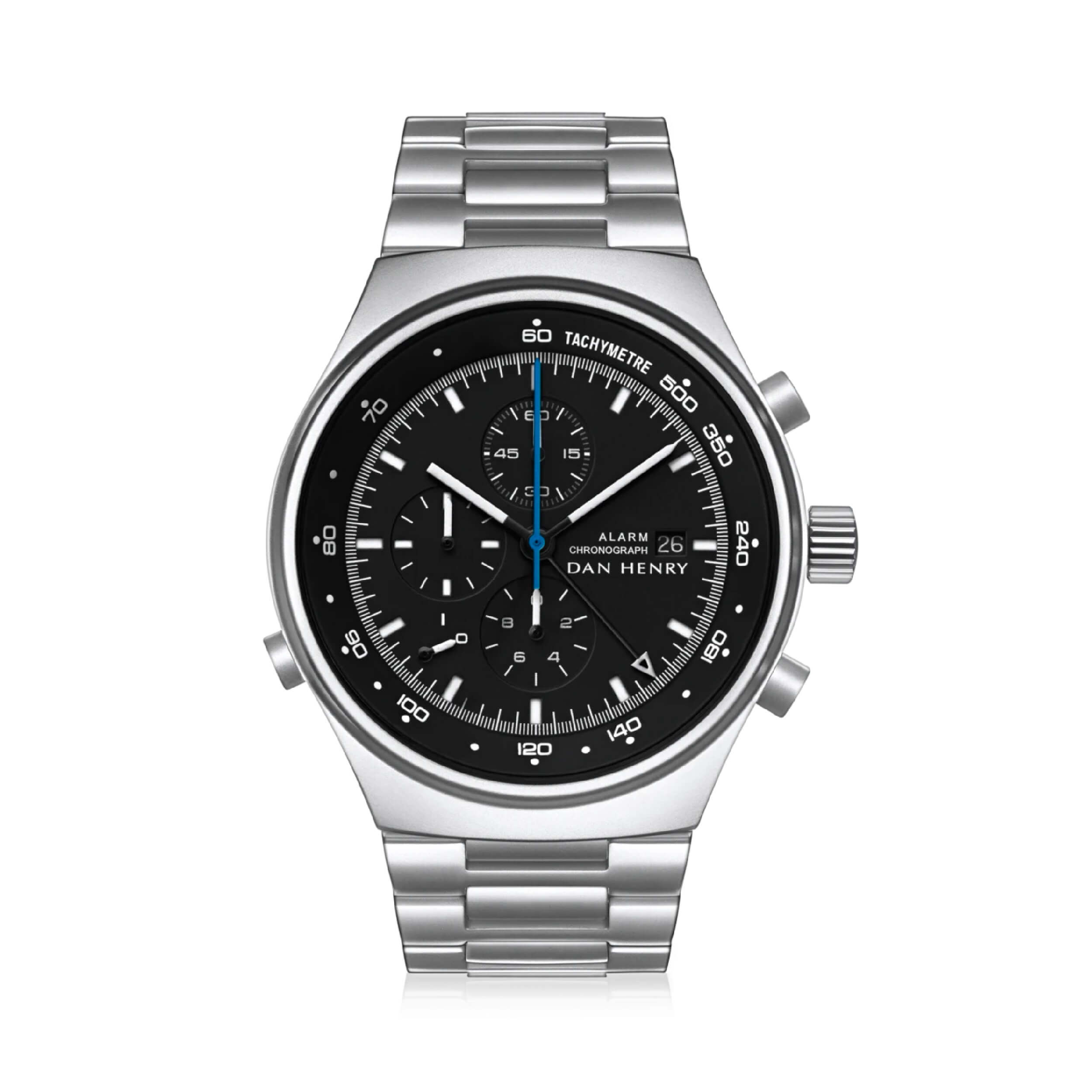 Available in both black and silver coloured stainless steel, this smart and very practical watch has been designed with a minimalistic edge so that it has high readability. The watch has the name 1972 as this was a year for great achievement and because it is a limited edition as only 1,972 in each colour have been produced.

This wristwatch is advertised as the ‘ultimate pilot watch’. If you have not come across the name Dan Henry, it is because it is a micro brand, founded in 2016 by Dan Henry who is an enthusiastic vintage watch collector with more than 1,500 timepieces.

Sporty, masculine and colourful, this stainless-steel watch has been inspired by the popular chrono classic collection provided by Victorinox. The Fieldforce Chrono has been designed to encompass the Victorinox brand values

The 42 mm dial is designed to be clear and the use of Superluminova® makes day and night readability easy. The dial is protected by triple-coated sapphire crystal. There are colourful additions to the dial with the red second hand and red and white Swiss Army Knife logo at the 12 o’clock position. The watch features chronographs and tachymeter and has a quartz movement and smart stainless-steel strap.

If the company name ‘Victorinox’ sounds familiar – it is! In 1884 Karl Eisener opened his cutler’s workshop in Ibach-Schwyz and five years later he began producing excellent knives for the Swiss Army. The knives are still produced by what is now a global company and in 1989 the company began making beautifully crafted watches that undergo 100 quality control tests before they leave the factory. 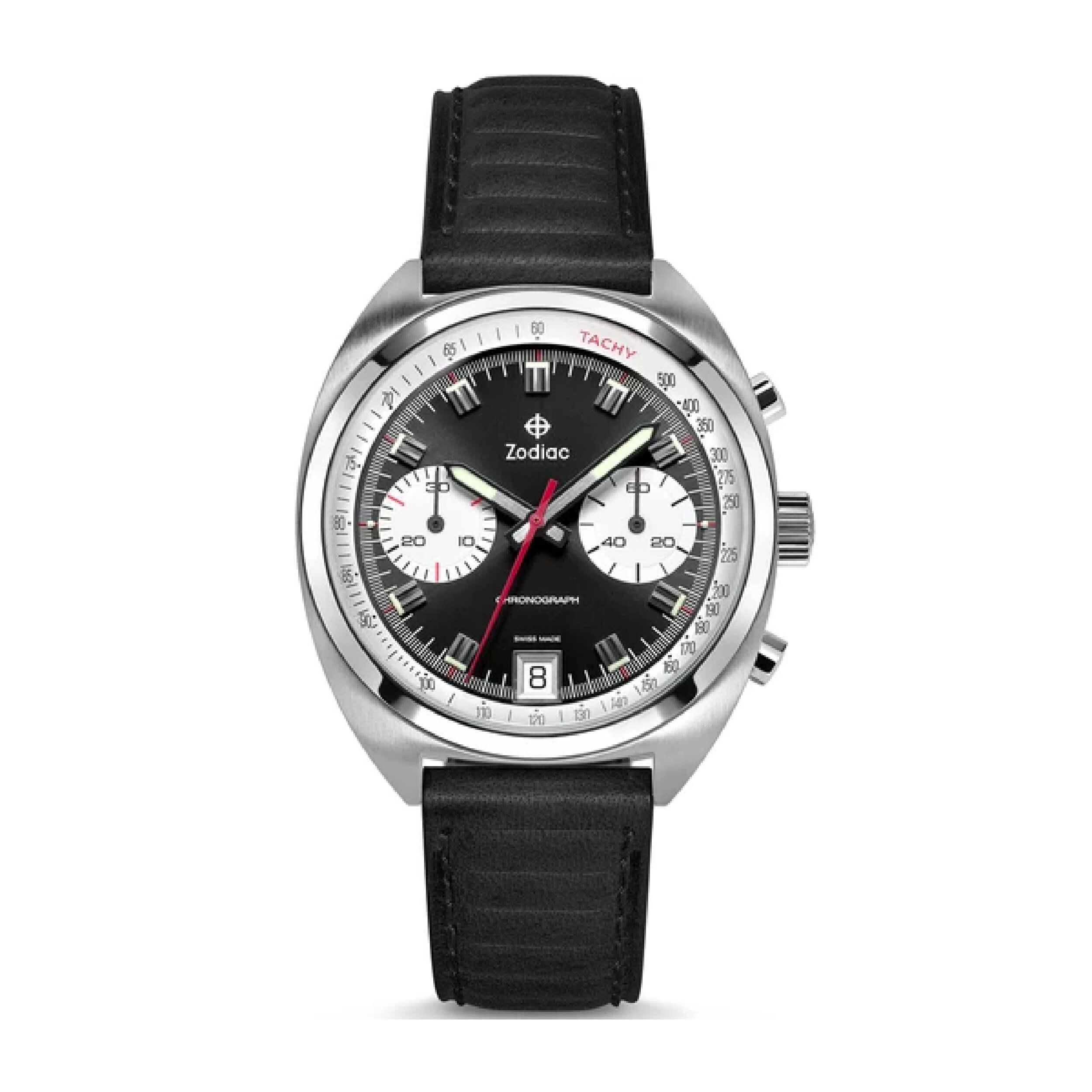 Zodiac is a brand that is known for its precision and innovative design and this watch certainly has both.

The 41.5mm case is in stainless steel and the watch dial is black with two mini-dials in white. The hour and minute hands have luminous tips and the second hand is red in colour. The watch has two chronographs, a tachymeter and a date window at the 6 o’clock position. The watch has a black leather strap.

Ariste Calarne set up his first workshop in Switzerland in 1882 and since then the name Zodiac has been synonymous with expertly crafted watches.

This watch comes with a two-year warranty and is water resistant to 10 metres. 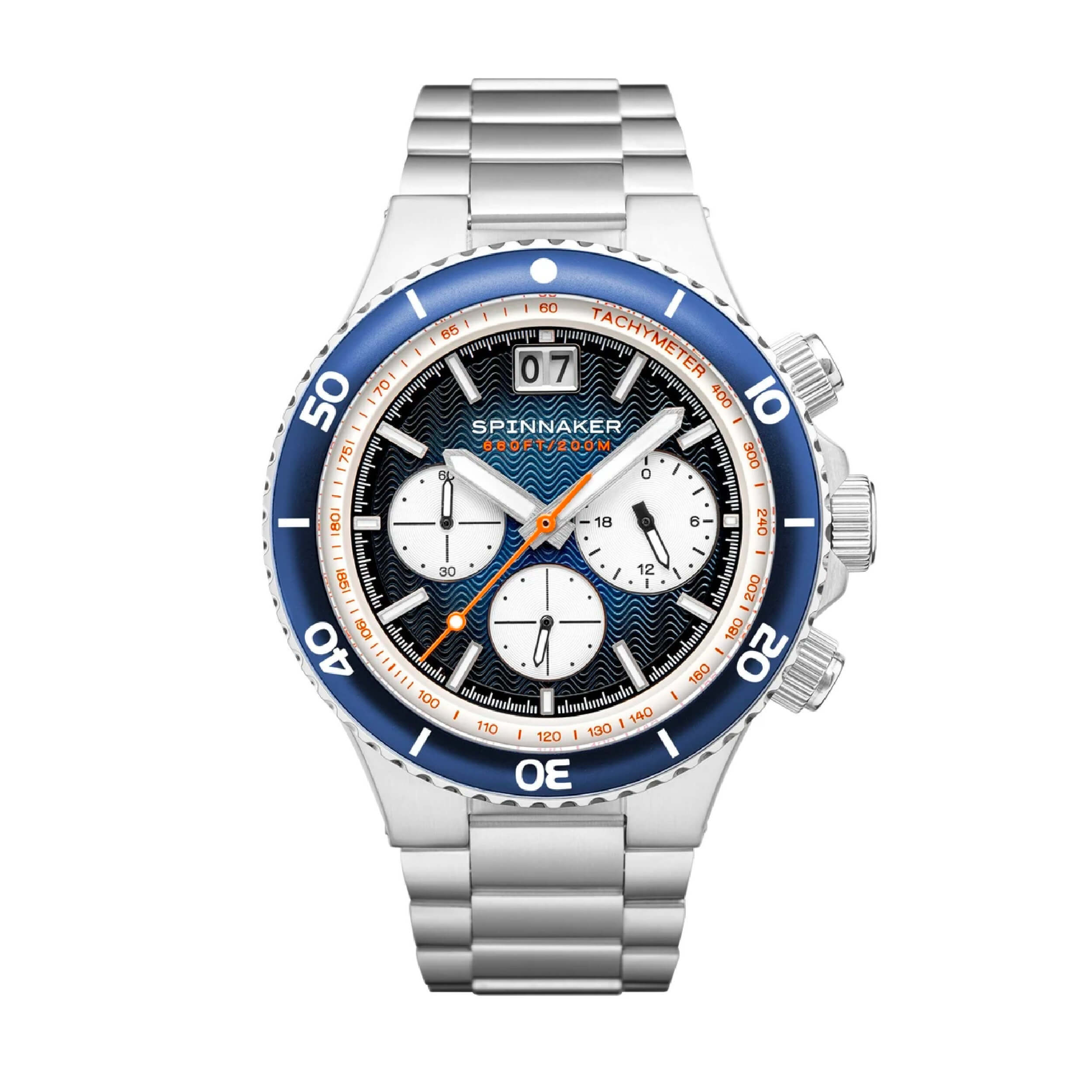 If you are looking for a modern, sporty looking watch that is just a little different, the Spinnaker Hydrofoil, fits the bill perfectly!

Styled in smart stainless steel with a contrasting blue dial and bezel, with three white mini-dials for the tachymeter, this watch is ideal for those who want a watch that is more informal in style.

At 43 mm, this watch has a slightly larger dial, with the three chronographs in the bottom two-thirds and the date window at the 12 o’clock position. There is a silver tachymeter on the blue bezel. 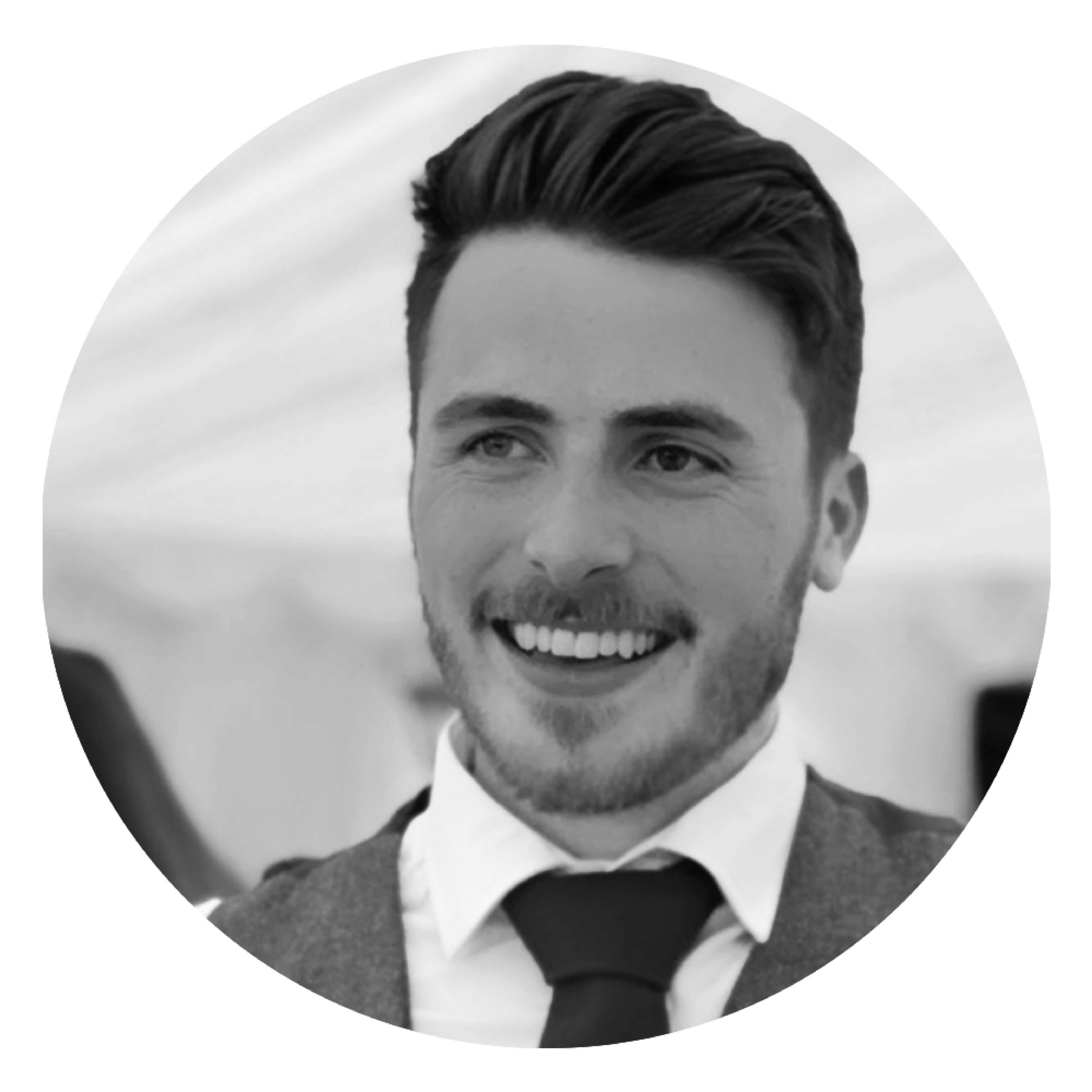